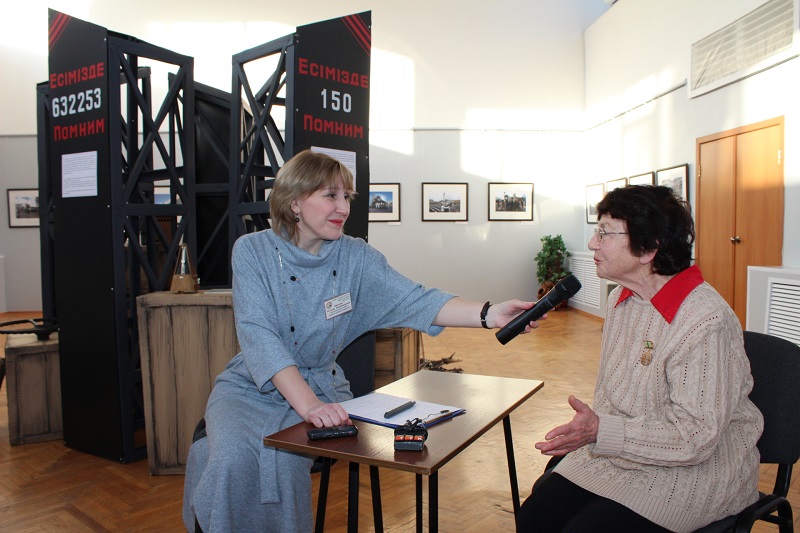 A historical interview “872 days” was held in January 30, 2020, with a resident of the besieged Leningrad Basina R.L. It devoted to the 75th anniversary of Victory in the Great Patriotic War.

Basina Ronya Leibovna was born in 1937 in the Leningrad city. She with her family ended up in a besieged city in September 1941. Father went to the front, went missing. Mom died of starvation in May 1942. Little Ronya was found by volunteer girls and taken to a children’s community. Later Ronya with other children on the “Road of Life” was transferred to a children’s community in the Yaroslavl region. Ronya Leibovna arrived in the Temirtau city, where she worked as a pediatric neurologist in 1973.

The memoirs of Ronya Leibovna about the constant feeling of hunger and cold, about an unknown missing elder brother, about the bombing of the children's echelon during the evacuation were supported by a tragic chronicle from the life of besieged Leningrad.

The interview took place against the backdrop of an exposition highlighting the tragic facts and figures from the life of besieged Leningrad. Each information block was accompanied by an art sketch composed of exhibits associated with the era of World War II. A special place in the exposition was taken by the metronome - a symbol of the besieged Leningrad. Visitors to the exhibition were able to hear the measured pace of the device, which 76 years ago every minute was heard by residents of the besieged city.

The guests of the event: students of “Miras” College, members of the City Council of Veterans, mass media of the city and the region learned about how the Republic of Kazakhstan helped the inhabitants of the besieged city, what contribution Kazakhstan soldiers including residents of the Samarkand village made to breaking the blockade of Leningrad