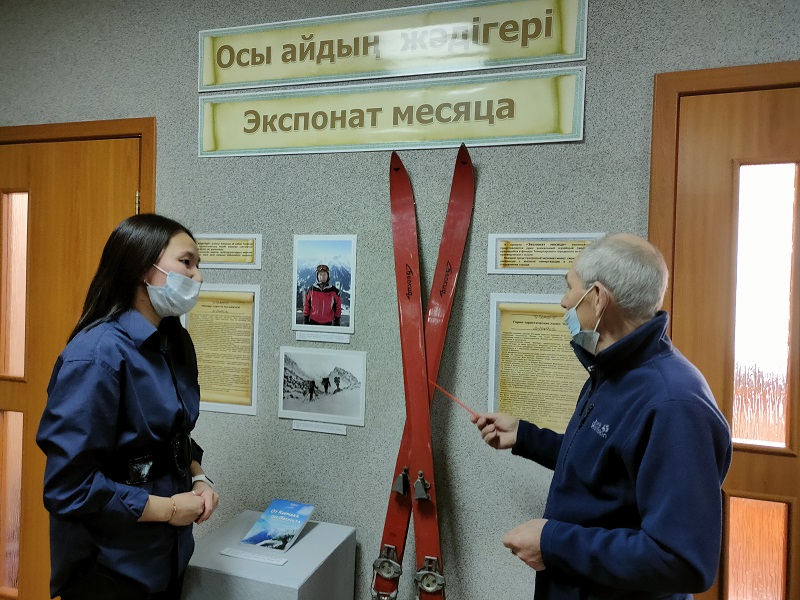 The opening of the «Mountain and tourist skis" Beskid» exposition was held online as part of the «Exhibit of the Month» project on January 27, 2022 at 11.00.

Skis are an essential part of any climber's equipment. They help to overcome long distances in the foothills.

Mountain-tourist ski "Beskyd", presented in the exposition, received the status of a legend for their durability. Wide runners made of hardwood with steel edging performed well both on the mountain slopes and in the forest. They were produced in Mukachevo, Ukraine. Wood for them was specially brought from Siberia and the Caucasus.

This ski was donated to the museum by a resident of the Temirtau city, a climber, an instructor of the 1st category, Andrey Viktorovich Fedorov.

He became interested in mountaineering after a meeting with climbers from the Karaganda city. He worked in the - Tourist - Mountaineering Club of Temirtau city. Most of the year, its participants trained on the Red Rocks in Temirtau, in the Suran Mountains

in Kurminka, the Bugyly Mountains, 12 km from the Darya station, Shetsky district. And in the summer they went to conquer the mountains.

At first, anyone could get a ticket to climbing camps through the trade union. Subsequently, the vouchers were already distributed by TMCT among those who had undergone pre-camp training: the theory and practice of mountaineering, physical training.

In 1968, Andrei Viktorovich was able to get a ticket to the Talgar camp near Almaty city. It was there, in the Zailiysky Alatau, that he conquered the first peak – Anniversary Peak (4180 m).

Mountaineering in the USSR was gaining momentum. More and more young people were seriously preparing to conquer the mountain peaks, but the alpine camps could not accept everyone.

Against the backdrop of a shortage of vouchers and a lack of experienced climbing instructors, mountain tourism is actively developing in Temirtau city.